Department at a Glance


HIGHEST package of 10 LPA offered by BYJU'S -The Learning app


Message from the Head of the Department

Who should choose Mechanical Engineering ? 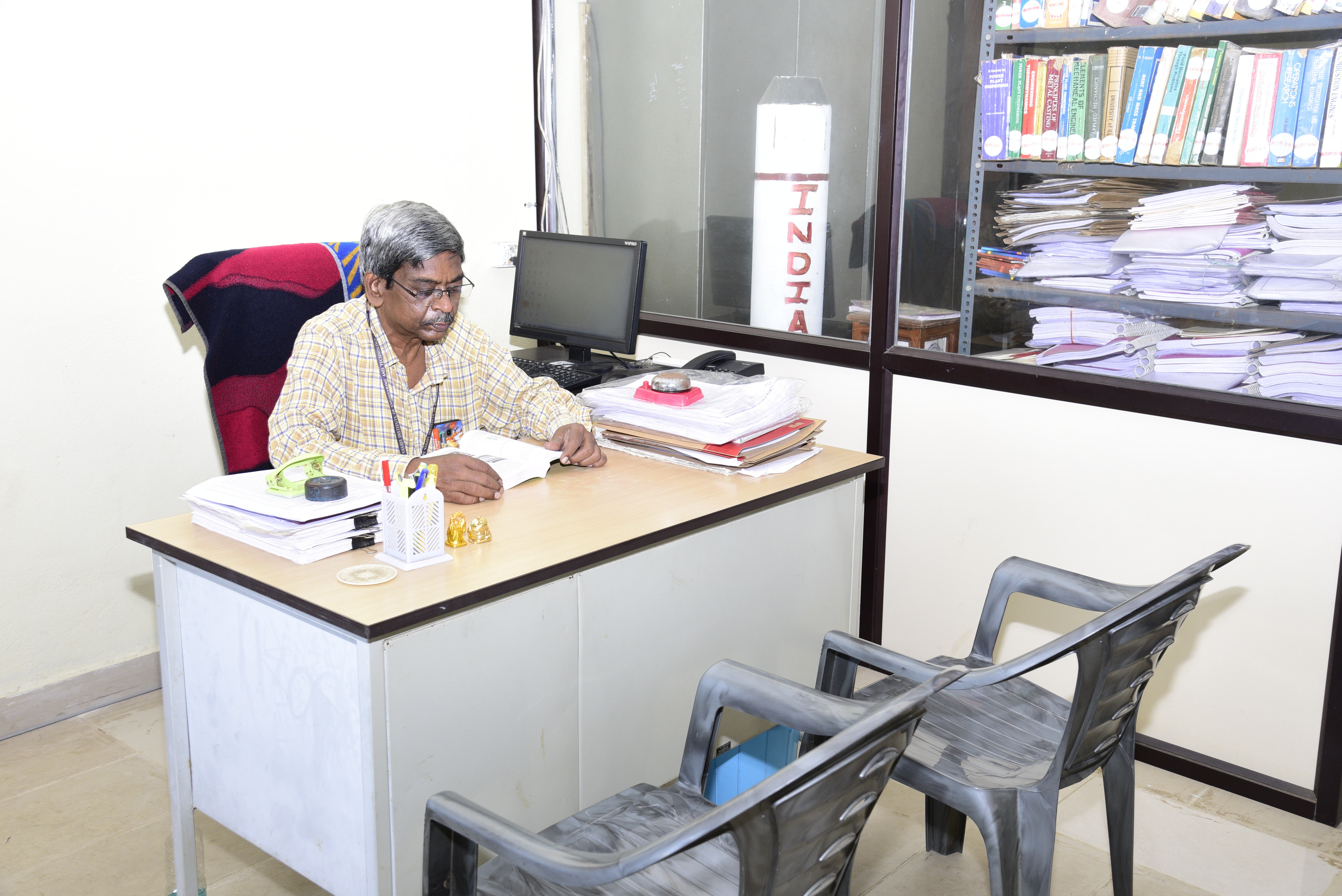 Those who wants to develop/acquire breadth and depth of knowledge and skills required to design fabricate and maintenance of things ranging from a safety pin to a space craft. Those who are interested to work with massive machines to tiny precision instruments/devices

What are opportunities in Mechanical Engineering?

How is the current industry scenario & how SVIET is tackling
these challenges?

The Indian Economy, in the coming years, will continue to flourish by leaps and bounds. And this can be observed considering the following aspects of our economy today.

Each of these points is self sufficient to ensure the Mechanical Engineers will never run out of jobs. Mechanical Engineering Program at SVIET has designed its curriculum to produce globally competent mechanical engineers with sound fundamentals and strong understanding of professional ethical and social responsibilities

Other unique aspects of Mechanical Engineering at SVIET

Unique features of the Department:

With the outstanding performance in academics, the cherry on the cake for the department is its student clubs and the professional body memberships.

Society of Automative Engineers (SAE) : SAE is a non-profit body that promotes & undertakes initiatives for knowledge dissemination & advancement in mobility technologies catering to land, sea, air & space. The society based at USA, spreads its wings over 150,000 memberships in around 100 nations.

BAJA : The BAJA SAE Series an event for the undergraduate engineering students organized globally by the SAE. It tasks the students to design, build, test and validate a single seater four wheeled All-Terrain Vehicle (ATV) in which around 500 student teams from various parts if the country. The team invincible 2.0 from the department is composed of 25 hard working and dedicated students from the final and pre- final years. The sedulous team work has been appreciated by the Chief Minister of the State, Sri.N.ChandraBabu Naidu during his visit to the college.

SUPRA: Under the SAE, is another event named SUPRA, which throws forward a competition of the design and fabrication of a racing car. Team Svayukti emerged out with glorious success, taking onwards the legacy of the college standing in the 27th among 250 teams across the country.

ELECTRIC SOLAR VEHICLE CHALLENGE (ESVC): TEAM Vikranta, the all energetic 25 membered team made their mark by securing the 5th position in the E-BAJA’15 from a competition of 300 odd teams. The team has also participated in the Asia’s Largest Solar Vehicle Racing Event and was bestowed upon with the “Best Appreciation Award”.

GO-KART:Enthusiasm is all that a Go-Kart puts in. “National Go-kart Design Challenge – 2016” is an event that deals with the designing and building of a Go-Karting Vehicle. “Team Aadhya”, a 16 membered all-girls team from the department have showed all their prowess by standing 40th in the National level. Also, the team has proved its worth in the prestigious “ Vishnu Kart Championship’16, projecting the spirit of team work.

(ISHRAE): “Indian society of Heating, Refrigeration and Air conditioning (ISHRAE) was started from 2016”.

I thought I can get success only by obtaining marks. Later, I changed my opinion marks may take me to some extent only. But our college maintained a good curriculum and followed it with sophisticated laboratories, personality development classes from experts and especially our TPCG cell continual training sessions made me to think that overall development is needed for success.

Great achievers may come from good institutions like SVIET.

My dream was to become an engineer. With the help of teaching faculty, hands on experience in every semester taught me how to apply theoretical knowledge to real life. Now I may say that I became a successful engineer

I can take decisions for my bright future individually because in SVIET, I learnt self disciplined education.

As an average student I joined SVIET ,by taking endless efforts of faculty and their training, I make myself as an excellent one.

The Department of Mechanical Engineering at the SVIET was established in 2010. offers Undergraduate program (B.Tech) in Mechanical with
an intake of 60 students.

To become a global knowledge hub of Mechanical engineering fulfilling the industry and society needs with ethical practices.

DM4: Cultivate the spirit of entrepreneurship with the sense of ethical, professional responsibility.

PEO2: Exercise latest techniques to get solutions to industrial/engineering problems.

PEO3: Gain the knowledge of other fields of engineering continuously to grab more opportunities

To provide mechanical engineering education that meets the highest global standards, So that the students are innovative, pioneering and leading in all of its core activities.

The Mechanical Engineering Department is committed to:

1.Prepare effective and responsible graduate engineers for global requirements by providing quality education.
2.Constantly strive to improve pedagogical methods employed in delivering the academic programs.
3.Respond effectively to the needs of the industry and changing world.
4.Conduct basic and applied research and to generate intellectual property.
5.Cultivate the spirit of entrepreneurship.
6.Make our graduates experts in practical problem solving with comprehensive thinking skills.
7.Arrange industry institution interaction for enhancing the knowledge of students and faculty by reaching MOU with various industries at local and national level.

Graduates of Mechanical Engineering will be able to
PEO1: Get good job opportunities or pursue higher studies
PEO2: Exercise latest techniques to get solutions to industrial/engineering problems.
PEO3: Gain the knowledge of other fields of engineering continuously to grab more opportunities.
PEO4: Establish as entrepreneurs with continuously leaning, professionalism, managerial skills, social responsibilities and ethical practices.

=> Establish the department as an excellent academic centre through expertise methods and modern laboratories.
=> Aim to achieve more number of research publications.
=> Recruit and retain high quality faculty members with interests in variety of areas of mechanical engineering.
=> Attain national recognition as an active engineering department.
=> To establish job oriented continuous training center for students collaborate with industry and other university in light of exchanging ideas.

=> Produce 50% of students to be passed out with distinction.
=> Achieve 90% academic results.
=> Motivate the faculty to possess doctoral degree.
=> Effective measures to ensure that all supporting faculty possess diploma or degree by the year 2014.
=> Improve the leadership qualities of the faculty and students.
=> To establish Advanced PG courses.
=> Increase interaction and collaboration with industry- institute interaction.
=> Encouraging the faculty for the skill up gradation through attending seminars, conferences etc.
=> To encourage Research activities.

DEPARTMENT OF MECHANICAL ENGINEERING
About Library

Mechanical Engineering departmentis equipped with a library apart from the Central Library of the Institution.Department Library comprise of a substantial No. of Volumes, Magazines, Dailies and Reference Books for ready reference to its Staff and Students.At present the department library has about different volumes with different titles. It also subscribes for e-Journals, Journals & Magazines.

Apart from curriculum books the library also has titles in the reference section that helps student in preparing for competitive exams and placement tests. Rich collection of books on software technologies makes the student improve his technical and programming skills. CD's and DVD's of lectures are also available in the department library facilitating quick learning.Though the library, at present caters to the needs of the undergraduate and post graduate students , it is as well in future being developed to meet the needs of staff doing their Doctoral Program.

The library functions on all working days from Monday to Saturday.

1. ENGINEERING KNOWLEDGE: Apply the knowledge of mathematics, science, engineering fundamentals, and an engineering specialization to the solution of complex engineering problems.
2. PROBLEM ANALYSIS: Identify, formulate, research literature, and analyze complex engineering problems reaching substantiated conclusions using first principles of mathematics, natural sciences, and engineering sciences.
3. DESIGN/DEVELOPMENT OF SOLUTIONS: Design solutions for complex engineering problems and design system components or processes that meet the specified needs with appropriate consideration for the public health and safety, and the cultural, societal, and environmental considerations.
4. CONDUCT INVESTIGATIONS OF COMPLEX PROBLEMS: Use research-based knowledge and research methods including design of experiments, analysis and interpretation of data, and synthesis of the information to provide valid conclusions.
5. MODERN TOOL USAGE: Create, select, and apply appropriate techniques, resources, and modern engineering and IT tools including prediction and modeling to complex engineering activities with an understanding of the limitations.
6. THE ENGINEER AND SOCIETY: Apply reasoning informed by the contextual knowledge to assess societal, health, safety, legal and cultural issues and the consequent responsibilities relevant to the professional engineering practice.
7. ENVIRONMENT AND SUSTAINABILITY: Understand the impact of the professional engineering solutions in societal and environmental contexts, and demonstrate the knowledge of, and need for sustainable development.
8. ETHICS: Apply ethical principles and commit to professional ethics and responsibilities and norms of the engineering practice.
9. INDIVIDUAL AND TEAM WORK: Function effectively as an individual, and as a member or leader in diverse teams, and in multidisciplinary settings.
10. COMMUNICATION: Communicate effectively on complex engineering activities with the engineering community and with society at large, such as, being able to comprehend and write effective reports and design documentation, make effective presentations, give and receive clear instructions.
11. PROJECT MANAGEMENT AND FINANCE: Demonstrate knowledge and understanding of the engineering and management principles and apply these to one’s own work, as a member and leader in a team, to manage projects and in multidisciplinary environments.
12. LIFE-LONG LEARNING: Recognize the need for, and have the preparation and ability to engage in independent and life-long learning in the broadest context of technological change.

Projects being carried out by students of Fourth Year are:

Technology is advancing day by day. The trends in technological sciences have been changing rapidly. Text books are written decades ago but the present technology is advanced, so we need new and novel findings and activities to cope up with the present advancements. An association called ARMS (Association of Revolutionary Mechanical Engineering Scholars) was inaugurated in the Department of Mechanical Engineering On 09.10.2012 to organize various departmental activities.

1. To organize industrial tours and visits.
2. To arrange Guest Lectures on topics of general interest and seminars of specific interest.
3. To focus on the cutting edge technology and present it to the students in an interesting manner by means of lectures, talk, articles and workshops.
4. To promote the interests of students in various technical areas pertaining to Mechanical Engineering.
5. To interact with other technical people, societies within and outside the institute to promote flow of knowledge and interest.
6. To encourage novel ideas by means of special projects.
7. To conduct social service activities.

The Logo of ARMS:

It consists of gear tooth which resembles as the wheel of progress and olive leafs for sustainable technology. The ARMS holding the globe indicates that to safeguard the world by student communities, the lightening torch to be handed over from one hand to another hand to eradicate darkness and to spread knowledge all over the globe long lastingly.

On this auspicious occasion, Dr V Ganesan, professor, IIT Madras, chief guest of the inaugural function, delivered an intellectual message on Horse power to Horsepower and IC engines emissions. Then Dr. Ganesan launched the ARMS Logo. Later The Management members felicitated the chief guest as a token of honor.